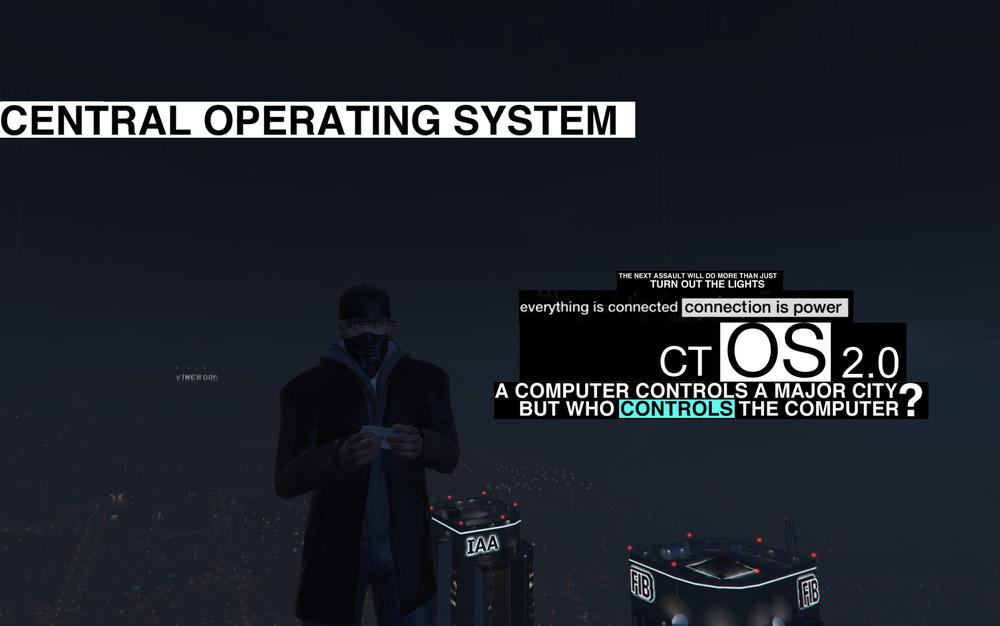 Download ctOS V (Watch Dogs Hack Mod) for FREE
“Everything is connected. I have to thank ctOS one day, one simple breach of their network, and I have access to half the state.” – AP

“After the major ctOS network failure that plunged Chicago into darkness last month, CEO Robert Nitman announced that ctOS has been upgraded to ctOS 2.0 to ensure the security of the system. Today, Nitman has announced that ctOS 2.0 is coming to the state of San Andreas. Mayor Leonardo met with Nitman today to discuss reducing crime rates in LS after the Union Depository robbery, where robbers made off with $201,600,000 million dollars. Mayor Leonardo said that with the installation of ctOS, this will cut the crime rate in half. Construction has started on ctOS towers, centers and installation, but a ETA has not been posted yet. We will stay with this story.” – Weazel News.

This brings some hacking features (hopefully all soon) from the game Watch_Dogs (not all completely accurate) onto your in-game phone. Pull up your phone and scroll to the bottom and you should see new contact’s as well as new hacks. Call one and make your possibilities come true, together we can take down ctOS in Los Santos!

Originally, this mod was released as “HackMod” due to the rest of the script being unusable. In v.02a, the name has changed to ctOS V, as all the script’s are now working again. The name of the mod from the beginning was suppose to be called “ctOS V” but due to all the other hack scripts facing bugs, I released it as “Hack Mod” with the Blackout hack added only. More features will be added, so stay tuned.

Any bugs or issues you are facing please tell me in the comments. This is my very first scripting mod I have done 🙂

Hopefully in v.05a, this will give all players the ability to unlock ctOS Control Centers and ctOS Towers throughout San Andreas, along with 12 (now 24) missions and a big finale. Also, by the time v.05a is done, players should have access to nearly 50% of the hacks on their phone, the rest of the hacks you need to unlock the ctOS Centers and Towers, as well as skill points.

In the v.05a update, I have increased the missions from 12 to 24 new Story Missions to add more of a Watch Dogs feel to the game. The same number of new antagonists will remain the same. But, there will be a certain plot shocker during the first mission that will lead up to all the other missions and the big finale. Since I don’t want to spoil it, let’s just say that one of the original characters from GTA V will have their Final Destination in the first mission. After v0.5a, I have visions to expand the mod even further to make GTA V more playable and enjoyable.

Installation:
Put everything inside your scripts folder.

Credits:
LetsPlayOrDy for Major Help.
Mora Hannover for eating all my snacks and fixing up the script.
The original creator of the iFruit Addon Pack.
Credit to ZyDevs for fixing up one of the main scripts, and helping me out with a very huge script.

*NOTE: Only a FEW ctOS features are available as LS is undergoing ctOS installation through out San Andreas.

*When you choose the blackout option, you will be unavailable to use any of the other hacks until the blackout is over (40 seconds)

*Remember, YOU MUST CALL either ADIEN PEARCE, BadBoy117, or LESTER TO GET THE MOD ACTIVATED!

Known Bugs:
Sometimes the phone will glitch out when selecting any of the new contacts, saying that the selected contact is no longer available. The quickest way to fix this is to either keep trying for a minute, and if it refuses to start up the mod, download a save game file that has the mission “The Third Way” completed.

Sometimes, the conversations between the Player and Lester will get cut off so you can’t read the full message. I will fix this in v.03a.

When phoning Lester, Aiden or BadBoy117, you will be unable to move until the conversation is over. This is a present bug in GTA 5’s functions, which causes some certain calls to freeze the player in his place until the call is over. This will also be fixed in v.03a.

Depending on where you are in GTA 5’s original story missions and which player you are, all of the hacks may glitch out with the error “The Selected Contact Is No Longer Available.” The quickest method I’ve found to fix this is to download a gamesave that has the mission “The Third Way” completed. The reason for this bug is because the game has a lot of contacts that aren’t visible to the player until the “The Third Way” mission is done, which is why all of the hacks get “locked” until that mission is done. I will try to fix this in v.03a.

0.5a: Adds 2 new hacks plus debut of the ctOS network.

0.4a: Will add in train hacks + a new hack to explode certain things.

PLEASE DO NOT REUSE MY MODS IN ANYWAY UNLESS I HAVE GIVEN YOU PERMISSION!

*NOTE, it is recommended that you remove any other mods from your script folder and add the files that are in the ZIP ONLY!

This mod could not be possible without the help of co-author Mora Hannover!

ATTENTION:
THIS MOD VERSION IS NO LONGER IN DEVELOPMENT! ctOS V_2.0 is in Development which will be an update to this mod. In the mean time, please use Julio’s version of Watch Dogs mod if this one does not work for you.