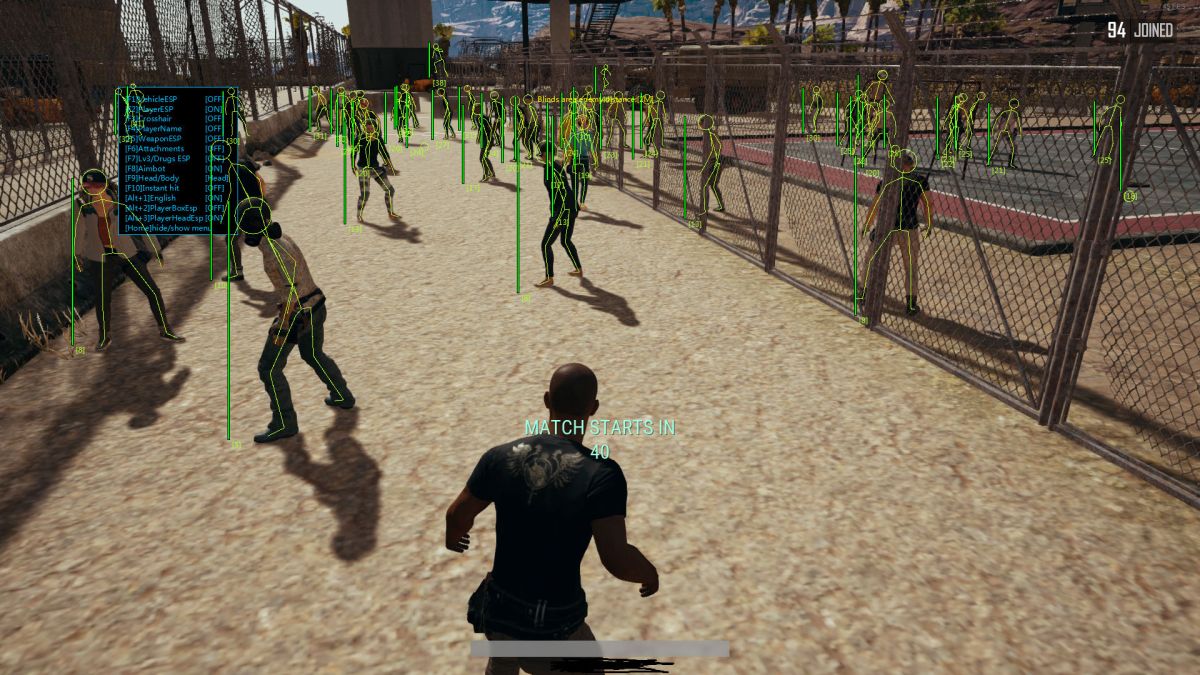 Players have been using PUBG cheats since the days of early access, and this is a big issue for the developers as they try to maintain fairness and balance for all players in the online battle royale. Despite spending years hitting players who step out of line with the ban-hammer, it still feels like PUBG cheats aren’t going away any time soon. This problem came to light again late in 2019, when the well known YouTube personality Dr Disrespect was killed by a hacker while playing the game, which lead to him uninstalling the game and embarking on one of his trademark rants to his followers.

While the Doc didn’t exactly hold back with his words, it shows the scale of the PUBG cheats issue still facing the game. We’ve put together some of the key things to look out for, and information on how to report a PUBG player you suspect is cheating. Read on, and help root out those that unfortunately ruin the experience for everyone else.

When it comes to PUBG cheats there are two types of hacks that are pretty common, aim hacks and speed hacks. Both are pretty self explanatory, one makes you speed round the map at a rapid pace, while the other will automatically make sure that your bullets always head towards an opponent. Then there are a number of more subtle cheats that aren’t usually as obvious.

PUBG aimbots and hacks are probably the most annoying things out there. They will take control of a players aim and automatically target it towards opponents. This can be abused in multiple ways. The most obvious is that every bullet they fire that has a line of sight towards another player will hit, and is the explanation to why other players seem to be able to hit ridiculous cross map shots.

Some aim hacks will also add auto fire, so if the hack detects that it has an unobstructed shot at an opponent it will automatically fire. This is basically an auto win hack, if you even so much go close to someone running this hack you will likely die. Fortunately this will be incredibly obvious in your death replay most of the time, so you can hit that report button and send the cheater packing.

PUBG speed hacks are a less damaging option, and can at times be pretty amusing to witness. They usually give the player a massive speed increase, meaning they can go from one side of the map to the other in seconds. It makes them near impossible to take down as they can be in the middle of Pochinki before a bullet you fired at them in Gatka will land, and means they can just run around and take down any players they see.

The actually usefulness of this is more limited than an aim hack. The hacker becomes obvious instantly, so this is probably only good for a couple of games before they get banned, and in the later stages of a game it makes them way more likely to slip into the blue and die unintentionally.

Almost all of the weapons in PUBG have some kind of recoil, and you are expected to learn how to control it or reset the recoil by implementing a short delay between shots. However, some people decide to download scripts or macros that automatically manage the recoil. This means all they have to do is press the fire button and don’t have to adjust their mouse to account for the recoil, as the script will do it all for them and every shot will go exactly where they want it to. It’s not quite an aim hack as it doesn’t lock on to a target, but it does give players a massive advantage in fights. Unfortunately they are also quite difficult to detect, as this could just be someone who has mastered that particular weapons recoil.

Wall hacks basically allow cheaters to see other players through walls, or add extra UI elements to reveal a players location. The most common versions show an outline of players, or their skeleton, to the hacker if they are in close proximity. This means that hackers don’t see the location of players on the other side of the map, but can use the information to their advantage to get a drop on unsuspecting players who think they are hidden. If a hacker is smart they can use a wall hack and still remain undetected, because it’s difficult to prove that they didn’t hear you or have some other legit information that lead to your death.

There are quite a few other cheats out there, or ones that we have seen in the past. Quick looting is a common one, which allows players to pick up everything on a loot pile and automatically equip items they need within a second. Admittedly this isn’t that useful, as most skilled players can do this with a drag looting technique anyway. Some players have also claimed to have working lag switches, which are designed to make other players in the game lag and give the hacker an advantage, but we must say we have never seen one actually being used. There’s also some hacks that allow players to use flying vehicles that travel at a rapid pace, and one amazing cheat that allowed players to have extendable arms so their body would still be in cover but they could reach up into the sky and still shoot. Although that one seems to have disappeared in recent times.

How to report PUBG cheaters

If you do come across an obvious cheater in PUBG there is always that big old report button on the death screen that you can hit. Generally speaking PUBG Corp is pretty good at banning any hackers, so any obvious ones you do report shouldn’t be around for too long. That doesn’t stop your game from being ruined, but it might save someone else’s, so always hit report if you come across a cheater.

There is also the anti-cheat systems in PUBG that auto detect some known hacks and ban the player automatically. PUBG Corp seem to keep this updated with all the big known hacks, so it’s not often that a specific hack will be around for too long, however there will always be people developing new ones to get around the system.